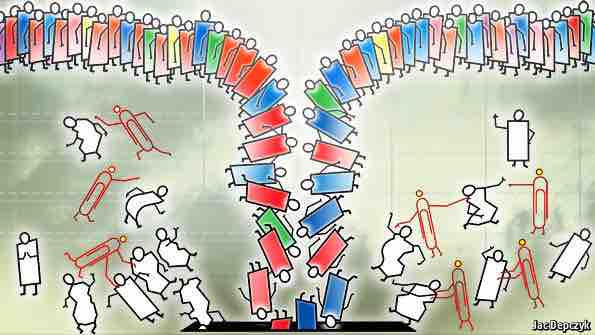 Economist: “IF VOTING made any difference they wouldn’t let us do it,” quipped Mark Twain, an American writer. Some governments, however, think voting makes such a difference that they oblige voters to do it. Voting is compulsory in 26 countries around the world, from Argentina to Belgium. To those elsewhere worried about declining voter turnout, compulsory voting may seem tempting. But it is not a shortcut to a healthy democracy.

Turnout has fallen from around 85% of eligible voters across the OECD in the late 1940s to 65% today, according to the Institute for Democracy and Electoral Assistance (IDEA), an NGO. For many, the changing composition of the voting electorate is as worrying as its dwindling size. Voters in Britain and America are disproportionately rich, well-educated and old. That, studies suggest, skews policymaking. In late-19th-century America, for example, rules barring most blacks in the South from voting seem to have resulted in a much lower ratio of teachers to children in black schools. Government spending on health, in contrast, jumped by a third when women got the vote. Health spending also rose by a third in Brazil, when the introduction of electronic voting made it easier for the less educated to vote.

But boosting turnout is tricky. Making it easier to vote, by extending voting hours, say, or reducing bureaucracy, sometimes helps, but often only marginally. Allowing voters to register on polling day increases turnout by 5-7 percentage points; making election day a holiday seems tomake no difference. One study found that after the American state of Oregon abandoned polling stations in favour of postal voting, turnout jumped by ten percentage points. Subsequent research failed to find such large effects, however, and there is some evidence that postal voting exacerbates the skew in who actually casts a ballot.  Read more.