Handling election mail is one of the Postal Service’s most important responsibilities. The postal system is involved with delivering voter registration material, sending out absentee and vote-by-mail ballots to voters, and returning ballots to election officials.

The Postal Service must ensure that election mail is delivered in a timely, reliable, and transparent way. As more and more people are choosing to vote by mail, that responsibility is increasing.

The Postal Service will handle millions ballots this election cycle, and it has been engaged in a state-by-state out-reach program to ensure election boards, political candidates, and mailers are aware of its rules, policies, and recommendations for election mail.  That includes any item mailed to or from authorized elections officials that enables citizens to vote, such as ballot materials, voter registration cards, absentee applications, and polling place notifications.

Customers who opt to vote through the U.S. Mail need to familiarize themselves with their local jurisdiction’s requirements regarding timely submissions of absentee ballots, including postmarking requirements. Voters are advised to contact their local election officials for questions about local deadlines.

As Postal Bulletin points out, the Postal Service handled more than 25 million return ballots (not including military ballots) in the last Presidential election. The expectation is that there will even more in the next election.

“The rise of absentee and early voting represents a tremendous change in U.S. election administration, perhaps the biggest since the adoption of the secret ballot and voter registration a century ago. As recently as the 1980s, fewer than 5% of ballots were cast before election day. That number quickly escalated over the next two decades.

This exodus from traditional election-day polling places represents a remarkable shift in how American elections are conducted, and the implications of this change are not yet widely recognized or fully understood.”Barry C. Burden and Brian J. Gaines, "Administration of Absentee Ballot Programs"

In most elections, a significant number of votes cast by mail are rejected.  According to a study done by MIT scholar Charles Stewart III, the number of votes lost through the vote-by-mail system in the 2008 election may have been as large as 7.6 million — approximately one in five individuals who attempted to vote by mail.

A large number of absentee ballots were requested by voters but never returned. Many were returned to sender as undeliverable as addressed.  The most common cause — responsible for about 30 percent of the rejected votes — was that the ballot missed the deadline.

Stewart acknowledges the estimate of lost ballots may be on the high end since it depends partly on what voters said in a survey, and  sometimes people say they voted when they didn’t.  But Stewart goes on to make this observation:

“If 20%, or even 10%, of voters who stood in line on Election Day were turned away, there would be national outrage. The estimates provided by this paper suggest that the equivalent may be happening among voters who seek to cast their ballots by mail, and yet there is nary a comment.”

While there are often problems with in-person voting, votes cast by mail tend to be rejected at a higher rate than votes cast in a voting booth. A study of voting in Florida, for example, found that election officials reject about 2 percent of the absentee ballots — double the rate for in-person voting. As one election official said, “The more people you force to vote by mail, the more invalid ballots you will generate.”

Votes cast by individuals living or traveling abroad are particularly vulnerable to rejection. An April 2016 GAO report noted that the Election Assistance Commission estimated that during the 2012 and 2014 general election cycles, the rejection rate for domestic absentee ballots was approximately 1 percent. In contrast, for UOCAVA ballots — i.e., voters covered by the Uniformed and Overseas Citizens Absentee Voting Act — the rejection rate was approximately 6 percent. The main reason for rejection was that the ballots had been received by local election offices after election deadlines.

In the 2015 election, thousands of votes cast by mail were tossed out in Ohio because of no postmark or because the ballot was received after Election Day and did not have either a valid postmark dated by the Monday before Election Day, or in some cases, any postmark at all.

The following graphics shows the various causes for ballots not getting counted.

If 20%, or even 10%, of voters who stood in line on Election Day were turned away, there would be national outrage. The estimates provided by this paper suggest that the equivalent may be happening among voters who seek to cast their ballots by mail, and yet there is nary a comment. Charles Stewart, III 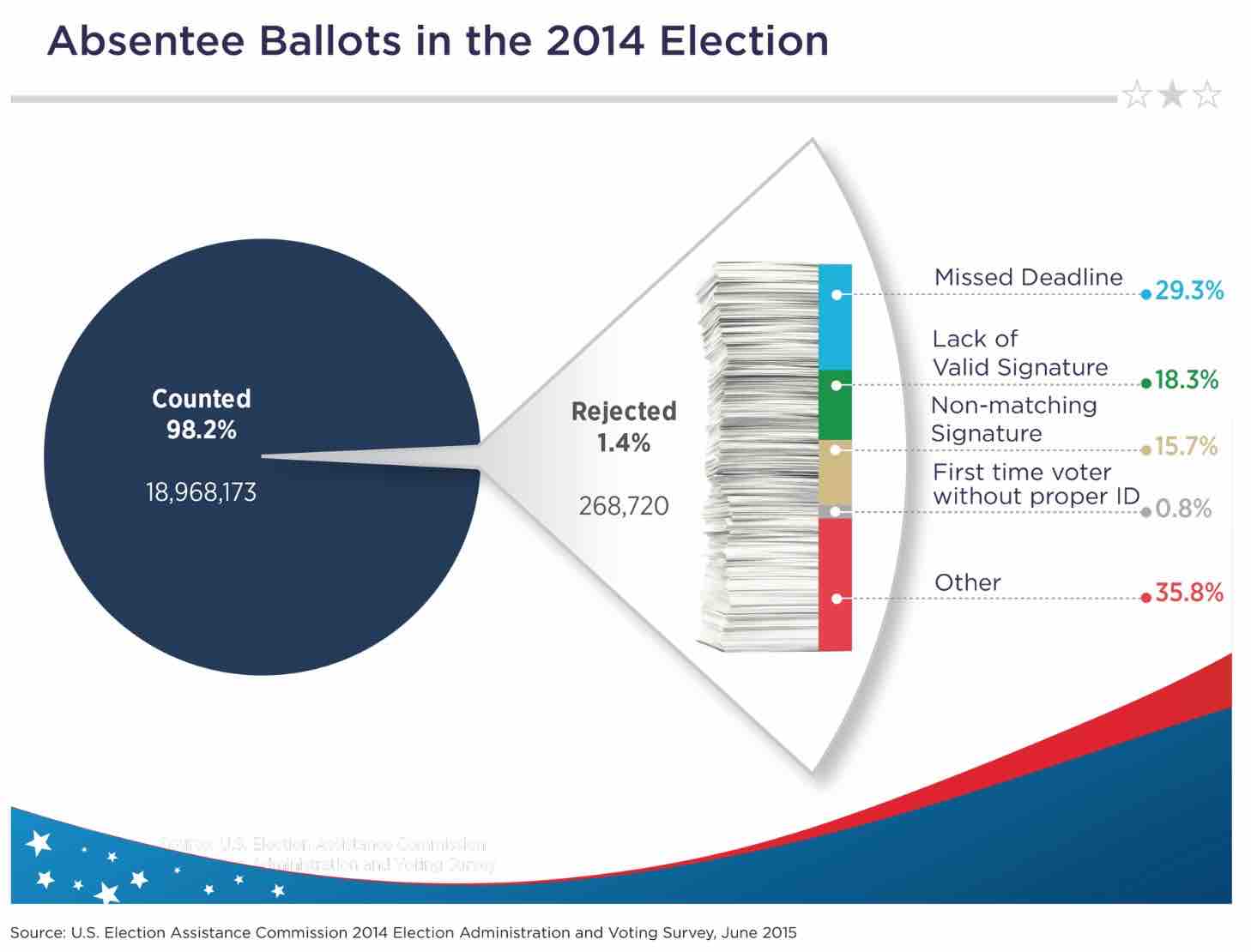 Service Standards refer to how long it takes for mail to be delivered.  They are officially defined as “a stated goal for service achievement for each mail class,” and they represent the level of service that the USPS strives to provide to customers.  Currently, the service standard for First Class mail is two to five days, and for Standard mail, three to ten days (within the contiguous U.S.).

In order to avoid disrupting the presidential election in November 2012, the Postal Service suspended the closure and consolidation of mail processing plants from September 1 to December 31, 2012.  There is some concern now that the change in service standards that took place in January 2015 will negatively impact the timely delivery of election mail.

In the cover story about election mail in the June Postal Bulletin, the Postal Service addresses this concern as follows:

“Concerns have been raised regarding how the change in delivery standards could require additional time for Election Mail, Political Campaign Mail, and ballots to reach voters. The Postal Service takes these concerns very seriously and plans are in place from coast to coast to ensure the timely receipt, processing, and delivery of election and political mail.”

But that may not be the case.

The Postal Service reports on the extent to which it reaches the standards in its quarterly service performance reports.  As the reports show, on-time delivery in fiscal year 2015 declined from the previous year, leading the Postal Regulatory Commission to conclude that the Postal Service had failed to meet its performance goals for 2015.  The following chart from the PRC report shows the decline:

Overall, this means that a lot of mail does not reach its destination within the service standards set by the Postal Service. While sending a ballot a week before the deadline would usually be sufficient, it does not guarantee that the ballot will be received in time.

A postmark is often the determining factor of whether or not a ballot will be accepted by election officials.  That’s the case for domestic absentee ballots in nine states, and for overseas and military voters, eighteen states, (There’s a table showing the law in each state at U.S. Vote).

In 2013, auditors in Iowa looked at rejected ballots from the 2012 election and found hundreds of ballots that were rejected because they did not have postmarks.  In 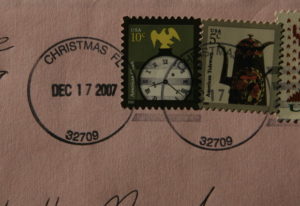 the 2015 election, thousands of votes cast by mail were tossed out in Ohio because of no postmark or because the ballot was received after Election Day and did not have either a valid postmark dated by the Monday before Election Day, or in some cases, any postmark at all.

Postmarks, as the USPS website explains, are imprints on stamped mail pieces that indicate the location and date the Postal Service accepted custody of a mailpiece.  The problem for elections, however, is that not all letters get postmarked, and the Postal Service has been moving away from postmarking the mail because postal cancellation once served a business function but postmarks are no longer necessary.

Postmarks are not required for mailings bearing a permit, meter, or precanceled stamp for postage, nor to pieces with an indicia applied by various postage evidencing systems.  (This includes Business Reply Mail, which is often how ballots are returned.)

Postmarks are generally applied by automated machines, but the letters must have the correct specifications in terms of size and flexibility in order to receive an automated postmark.

In those states where a postmark is crucial for ballots, it may ultimately be up to the voter to ensure that the ballot is properly postmarked.  That may mean going to the post office and talking directly to the postal employee at the window, or handing the ballot to a letter carrier and asking for the postmark.  Just assuming that all mail gets a postmarked could be a costly mistake. 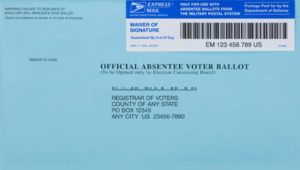 Barcodes offer an excellent way to track ballots, not only to determine if they were mailed on time but also to ensure that they don’t get lost or delivered in an untimely way.

As a recent GAO report on mail delivery performance notes, however, not all barcoded mail gets tracked end to end.  Sometimes, for example, USPS employees may not have scanned the barcode on a container of mail when it was unloaded at a USPS facility. Sometimes the automation equipment fails to record the scan, and there are other problems as well.

In a memorandum to the President’s Commission on Election Administration, several writers recommended better tracking of election mail using barcodes:

“We recommend that election offices use USPS Intelligent Mail Barcode tracking on mail-ballots and proactively communicate that tracking information to voters. Voters should receive a notification when a ballot is mailed to them. After returning their ballot in the mail, voters should receive confirmation of their ballot’s receipt by the appropriate election official. Ballot tracking increases voters’ confidence that their ballots are being counted. Equally important, the collection of data about ballot delivery would allow policymakers to identify points of failure and start addressing them.

“It’s important to note that this recommendation goes beyond the current process in Oregon, where voters can check online or by phone that ballots have been received. Instead, all voters should automatically receive digital receipts from election authorities that their ballots have been counted.  Ballot trackers are feasible improvements already being used in a handful of election districts, including Denver, Colorado. And for the sake of full disclosure, we are designing and developing a ballot tracker tool for local election administrators.” 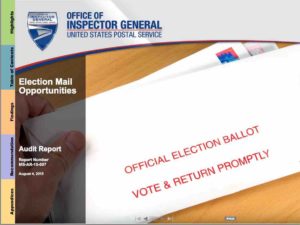 In August 2015, the USPS Office of Inspector General released a report recommending that the Postal Service develop a plan to encourage vote-by-mail not only as a revenue booster for the agency, but also to boost voter turnout. The report estimates that if the USPS encouraged vote-by-mail it could increase revenue by $2 million per year and “support the Postal Service’s obligation to bind the nation together.”

The Postal Service was less than enthusiastic about the recommendation. While management recognized the value of putting more resources into political mail (campaign literature), it did not see much reason to encourage more voting by mail.

According to Sally Haring, Manager, Corporate Audit and Response Management, the Postal Service intends to focus its marketing efforts and resources on political mail, not voting mail, in order to get “the most bang for the buck.”

Or, as the OIG put it, “Management stated they want to optimize the use of limited sales resources to focus on the larger political mail market.”