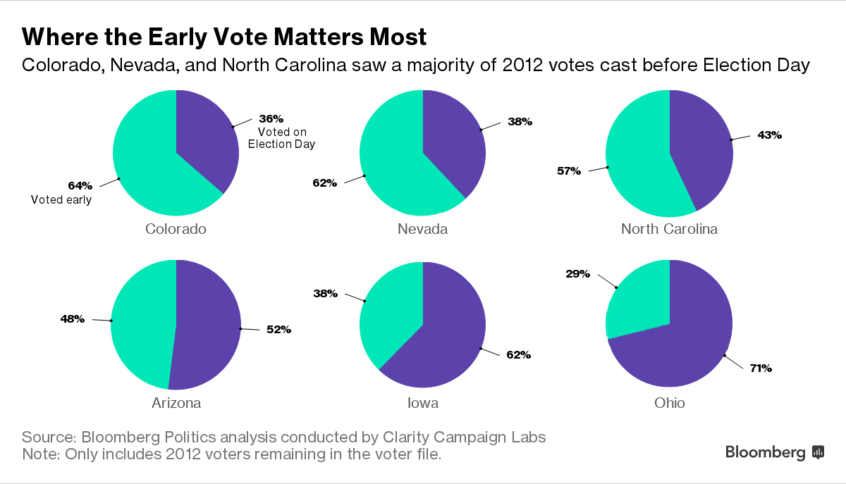 Bloomberg News: Early voting has transformed political campaigning. Here’s how it may play out in Iowa, Nevada, and North Carolina.

Election Day starts this week. Beginning on Sept. 23, any Minnesotan can go to a local election office and complete an absentee ballot. The following Thursday, voters in neighboring Iowa have the same opportunity. Between Oct. 20-24, North Carolina, Nevada, and Florida get in the game. In Colorado, the entire election will be conducted by mail ballot. By the constitutionally mandated first Tuesday after a Monday in November, more than one-third of Americans will have already voted for president.

There are still battleground states that make no provision for early voting—Pennsylvania, Virginia, and New Hampshire stand out for their old-fashioned ways—but in those that do it has created a new kind of electoral arms race. Early voting is a particular gift to well-organized, well-funded campaigns, which can extend their turnout operations across as long as six weeks, locking down precise factions of the electorate in domino-like fashion, and sequence their persuasion efforts with a clear view of who has yet to vote. Building on the ground-game innovations of President Barack Obama’s two successful efforts, Hillary Clinton’s campaign has reshuffled its entire org chart with the election timetable in mind, grouping early-voting states together so that get-out-the-vote efforts can happen on an accelerated, exacting schedule.

The extended calendar poses an array of new tactical questions: Does the campaign push its most committed supporters to cast ballots as soon as possible, so that they are banked early and the campaign can shift to mobilizing less likely voters as Election Day approaches? Or do they assume that habitual voters will get around to it on their own timetable, and use the early period to expand efforts focused on those who need an extra nudge to turn out? Caching early votes has one other benefit: it limits the risk that an October surprise could swing one’s supporters away, or keep fickle voters home.  Read more.