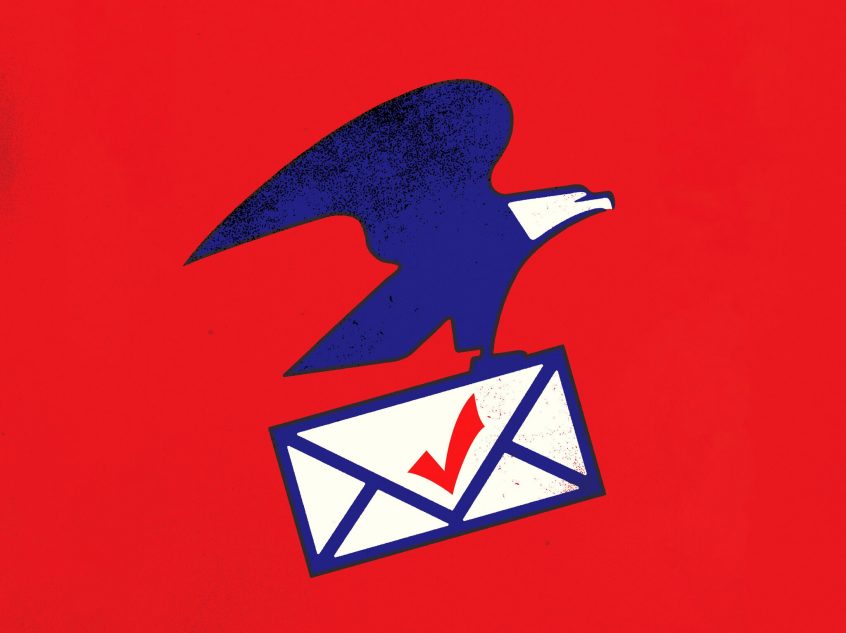 Especially amid the pandemic, it’s the surest path to a more inclusive, more accurate and more secure election.

New York Times Editorial Board: For a man who votes by mail himself, Donald Trump is strangely obsessed with the idea that it is the most dangerous method of casting a ballot.

The president was at it again this week. “Rigged Election,” he tweeted of New York’s well-publicized struggles with counting mail-in votes. “Same thing would happen, but on massive scale, with USA.”

Voting by mail is a “catastrophic disaster,” he later said, “an easy way for foreign countries to enter the race.” Any election conducted by mail would be “INACCURATE AND FRAUDULENT.”

Finally, the hammer: “Delay the Election until people can properly, securely and safely vote???”

In a word, Mr. President: No

The election will not be delayed — because the president can’t legally delay it. Its date is set by federal law, as is the date on which the presidential electors must cast their ballots. Then there’s the backstop of Inauguration Day, set by the Constitution as Jan. 20.

Mr. Trump says things like this often enough that it can be easy to brush him off. He even claimed that the 2016 election, which he won, was rigged. But the president’s words, however misleading, carry weight. So it is necessary to say it again: Especially in the midst of a raging pandemic, voting by mail is the surest path to a more inclusive, more accurate and more secure election.

The good news is that the primary season gave states a chance to run their elections with far more mail-in ballots than usual, and in many places the system worked well. But there were multiple high-profile examples of mail voting gone wrong. In Wisconsin, thousands of absentee ballots were requested and never received. In New Jersey, 10 percent of mail ballots were thrown out for arriving too late or for being otherwise deficient. In Pennsylvania, tens of thousands of absentee votes were either not cast or not counted, especially among voters who requested their absentee ballots closer to the election.

Mr. Trump and his allies have exploited these bungles to the hilt, claiming that they reveal how dangerous it is to vote by mail. Ignore them. Voting by mail — or absentee voting, which Mr. Trump pretends is something different even though it isn’t — has risks like any other method, but overall it is safe and accurate. So safe and accurate, in fact, that in five states most or all voters use it, and in three other states more than half do. In those states, elections go off without a hitch.

That’s why as soon as the pandemic hit, it was clear that expanding access to mail voting across the country would be essential for the November election to succeed. Voting experts pleaded with Congress to supply the necessary funds to help states with less experience in processing absentee ballots.

More than four months later, only a fraction of that money has been handed out. As Congress battles over the latest stimulus bill, it’s not clear if any more is on the way. This is a dereliction of Congress’s duty to ensure the functioning of American democracy.

The American people need to be able to vote in the November election, and they need to be able to trust the outcome of that vote. What can be done over the next three months to make the process as accessible, accurate and secure as possible? Here are three relatively straightforward tasks.

First, aggressively counter misinformation about mail voting, which continues to be spread not just by President Trump, but also by top members of his administration.

On Tuesday, Attorney General William Barr testified in Congress that he believed mail voting on a large scale presented a “high risk” for massive voter fraud.

As Mr. Barr well knows, voter fraud is rare and is virtually nonexistent in the states where most or all voters cast their ballots by mail.

The problem is that many people in the Republican Party are convinced of its own unpopularity: Some openly admit their beliefthat when more people vote, Republicans are more likely to lose. In March, Mr. Trump complained about a proposal by House Democrats to expand access to the ballot. “They had levels of voting, that if you ever agreed to it, you’d never have a Republican elected in this country again,” he said.

It’s true that mail voting increases turnout, particularly among groups that tend not to vote, like young people. Colorado saw a turnout increase of 9 percent when it switched to all-mail voting, and the increase was nearly double that among young voters.

Republicans may be thinking about numbers like these when they rail against mail voting. But the turnout increases from mail voting don’t appear to change the results.

The real reason to make mail voting widely accessible isn’t to help one party or another — it’s to help the American people participate in their own democracy as fully as possible. That’s why voters of both parties like it so much, which may be the best evidence of all that it has no built-in partisan bias.