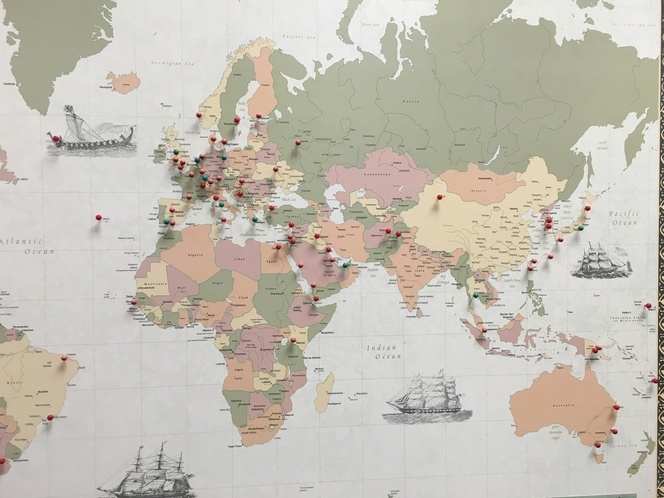 Tampa Bay Times: It’s seven weeks before primary election day in Florida, but the first wave of primary ballots is in the mail to voters living or stationed in dozens of countries overseas. By law, those ballots, many headed to active-duty military personnel, must be in the mail by Saturday, July 16, or 45 days before the Aug. 30 election….

In Okaloosa County, the home of Eglin Air Force Base, Supervisor of Elections Paul Lux said Tuesday he mailed 3,600 ballots, and another 1,300 will be sent by Friday to voters who emailed requests to his office. On Lux’s office wall in Crestview is a map (above) dotted with dozens of pins marking the many destinations for his county’s overseas ballots.

Yes, overseas voters can request a ballot by an email, but they can’t return a completed ballot electronically, because Florida prohibits it. Those voters can only return a ballot by regular mail or by fax, an antiquated system that Lux said has to change. He has said that a soldier stationed in Afghanistan shouldn’t be forced to scramble to find a fax machine in the desert.

“We have been conducting absentee balloting for our military the exact same way since the Civil War in the 1860s,” Lux said. “They send me a request for an absentee ballot. I put it in the mail and hope they get it, and they vote it and put it back in the mail and hope I get it in time for it to be counted.” He emphasized that he supports transmitting of completed ballots electronically — not voting on the Internet.  Read more.