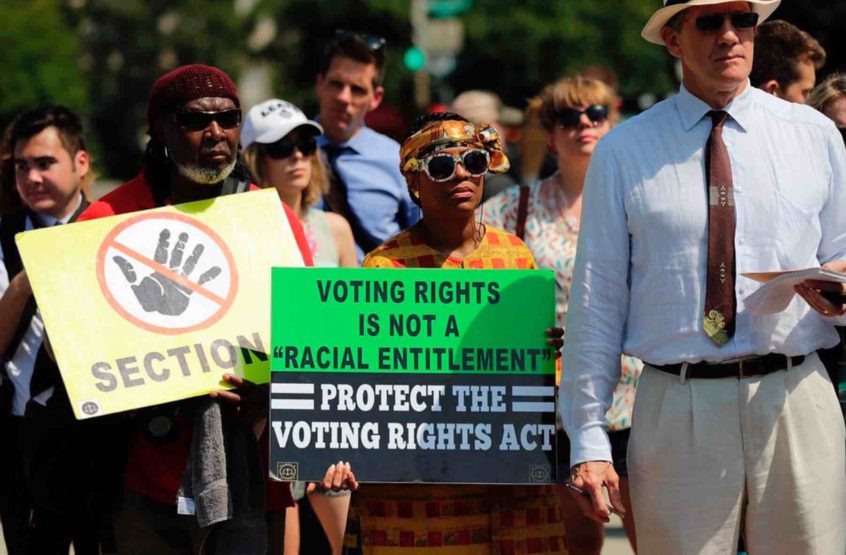 LDF: The NAACP Legal Defense and Educational Fund, Inc. (LDF), has released a report titled, Democracy Diminished: State and Local Threats to Voting Post-Shelby County, Alabama v. Holder (Shelby County), a detailed collection of state, county, and local voting changes — proposed or implemented — during the past three years since the Supreme Court’s decision in Shelby County, Alabama v. Holder. The Court’s decision in Shelby County eliminated the provision of the Act that for fifty years required jurisdictions with a history of voting discrimination to submit proposed changes to a federal authority for preclearance before implementation.

The report describes several cases in which states have implemented or tried to implement voter ID laws that impact absentee voting. Here are a few excerpts from the report.

Alabama: Alabama’s photo ID law restricts in-person and absentee voting to individuals who are able to produce one of seven required forms of “valid” photo ID. A prospective in-person voter without the required photo ID cannot cast a regular ballot unless two election officials present at the polling place choose to “positively identify” that person.

Michigan: In 2015, the Michigan Legislature considered, but did not pass, a bill, S.B. 639, which would have allowed first-time voters to vote by mail only if they present ID in person at the municipal clerk’s office for the municipality of registration.

According to civil rights and pro-democracy organizations, who opposed this proposal, this requirement is needlessly restrictive since other laws like the federal Help America Vote Act (HAVA) already have identification requirements for first-time voters.

In 2014, advocates for Arab-American voters in Dearborn Heights challenged election officials for preventing Arab-American individuals from obtaining absentee ballots, purportedly based on concerns about potential voter fraud and campaign irregularities. Advocacy groups monitored polls and provided a hotline for voters to report such issues during a primary election.105 A Wayne County judge declined to halt the counting of certain challenged absentee ballots in Dearborn Heights that purportedly were cast fraudulently. The court found that “[t]here [was] absolutely no evidence in this case that there has been one fraudulent ballot submitted by absentee ballot.”

Virginia: During the 2015 legislative session, state lawmakers passed a bill (under the guise of preventing purported non- documented voter fraud) that would require voters to submit a copy of their photo ID when they apply by mail to vote by absentee ballot.201 Under existing law, only people who apply for absentee ballots in person are required to present photo ID.

In June 2015, in Lee v. Virginia Board of Elections, individual voters and the Democratic Party challenged the photo ID law and other elections-related practices. late May 2016, a federal court upheld Virginia’s photo ID law. Plaintiffs are appealing.