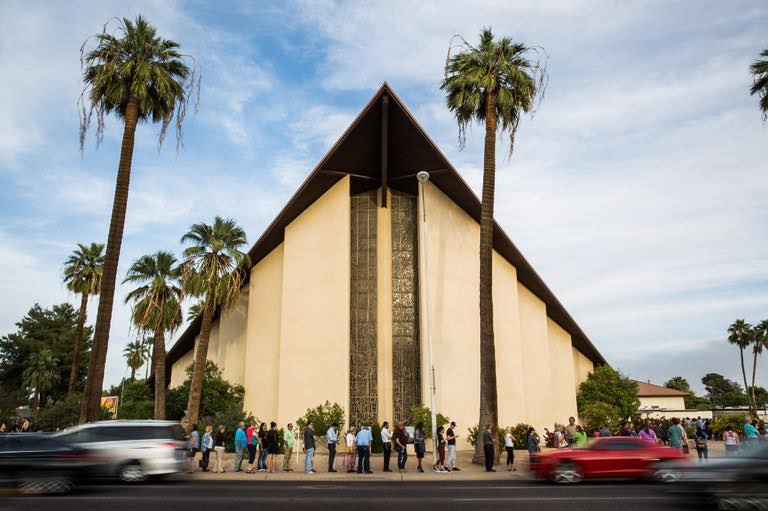 New York Times: Cynthia Perez, a lawyer, stopped by a polling site on her way to work here on Tuesday, thinking she could vote early and get on with her day. She changed her mind when she found a line so long she could not see the end of it.

The line was just as big when she came back midafternoon — and bigger three hours later, after she had finally cast her ballot.

Days later, angry and baffled voters are still trying to make sense of how democracy is working in Maricopa County, the state’s most populous, where officials cut the number of polling places by 70 percent to save money — to 60 from 200 in the last presidential election. That translated to a single polling place for every 108,000 residents in Phoenix, a majority-minority city that had exceptional turnout in Tuesday’s Democratic and Republican primaries.

All day, lines meandered along church courtyards, zigzagged along school parking lots and snaked around shadeless blocks as tens of thousands of voters waited to cast their ballots, including many independents who did not know that only those registered to a party could participate in the state’s closed presidential primaries.

But beyond the electoral breakdown here, many observers saw Arizona as a flashing neon sign pointing toward potential problems nationally at a time that 16 states will have new voting restrictions in place for the first time in a presidential election. The presidential election will be the first since the Supreme Court dismantled a crucial section of the Voting Rights Act in 2013, freeing nine states, including Arizona and parts of seven others, to change their election laws without advance federal approval.  Read more.